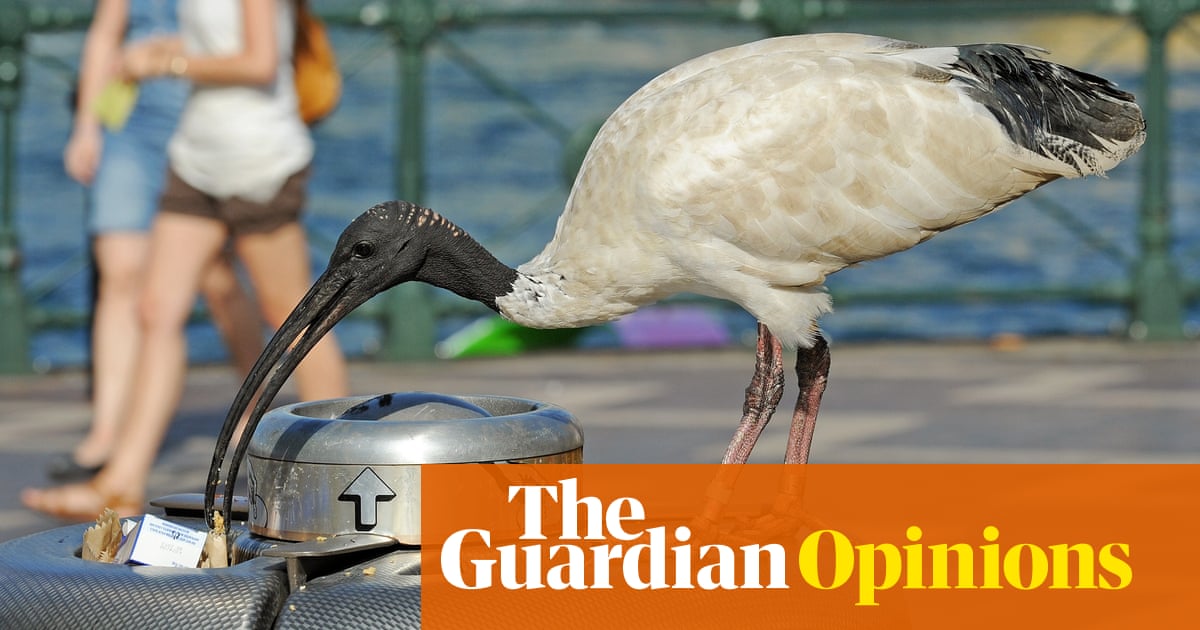 We recently took our children to Sydney for the first time. They loved it: the Manly ferry, the Opera House, hanging out on Bondi beach hoping to see some idiot tourist get pulled from the surf by the lifesavers from Bondi Rescue.

But perhaps their most lasting memory was provided by an ibis foraging around Circular Quay. When the first fleet unloaded its scurvy-sickened crew at the same site in 1788, there were very probably no ibis lurking. Their natural home was the wetlands of the Murray-Darling basin. They only started to become regulars in Sydney during the 1950s – perhaps not coincidentally around the time of the great surge in irrigation infrastructure that started sucking water out of the rivers and wetlands of their traditional territory.

Yet last week they were all over the place, captivating my kids with their exotic ugliness. Among the bin raiders and hamburger thieves was a bird with its foot entangled in some sort of line, perhaps even long strands of human hair like what you see on a clogged hairbrush. The toes were so constricted against the leg that it could only hobble on the resulting stump.

Australia’s birds: pretty and sweet or just a pack of bastards? | Sean Dooley

Such is the fate of the urban ibis: driven from its home range in the Murray-Darling by a lack of water after a knockout combination of severe drought and a water policy that denies the vast bulk of natural flow, and forced to eke out an existence on the streets of our cities with all its attendant dangers, including ensnaring strands of fishing line (or even perhaps human hair) that cut the circulation and eventually amputate a foot.

Yet the ibis persists. On Wednesday this week, BirdLife Australia released the results of the 2019 Aussie backyard bird count. For the first time since the count started in 2014, a new bird made it into the top 10 most common urban birds in the country: the Australian white ibis, or humble bin chicken. It moved from 13th place in 2018 to 10th, yet in every major waterbird survey conducted around the country the overall numbers of white ibis appear to be in decline.

This is because there is very little water anywhere else. The biggest jump in numbers came from around Melbourne and Adelaide, which have suffered slightly less from the drought and have more water in the landscape. Interestingly a similar effect was noted with a number of outback bush birds such as crimson chats, white-winged trillers and white-browed woodswallows which showed marked moves southward into settled areas in this year’s count.

‘Everyone has a bird story’: which species will take the bird of the year crown?

Birds are exceptionally good indicators of what is happening in our environment. The appearance of more drought refugees into our cities speaks as clearly as the roar of a bushfire’s flames that the natural landscape is rapidly changing.

The bin chicken was flavour of the month in the first Australian bird of the year poll in 2017, but it appears our “Ibis McIbis Face” moment has receded somewhat and it languishes at the bottom of the 10 contenders in the 2019 bird of the year poll. I didn’t vote for it in 2017 but have changed my mind this time.

Many people do not like the bin chickens that have the temerity to crowd into our cities. Perhaps in part there is an element of shame about what we have done to them in this reaction. The more I see of these city ibis the more I admire their resilience and adaptability. The persistence of the ibis is something that we should celebrate.